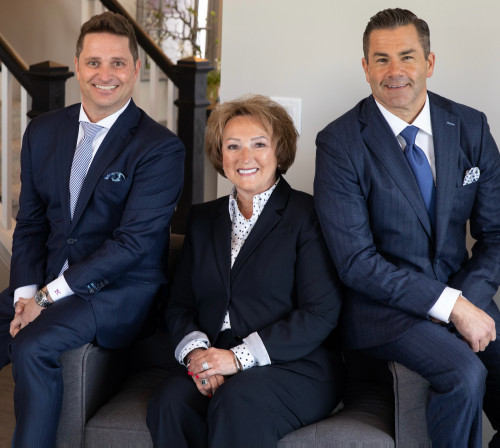 Tom started his career in 1987 and he instantly set some lofty goals for himself!  As a native to York County, Tom quickly made his mark in the area as the premier Realtor to select when buying and selling a home!  He set residential records for Bennett Williams and he has been honored on a national level  through the Howard Britton Star Power Series!  He created his team carefully and knew how important the value of a team would be for his continued success and more importantly, how it would be a benefit to all his future clients with buying and selling their home!

Mark Carr began his real estate career fresh out of college in 1994.  Mark was determined to "think outside the box" and make his mark on the York County real estate industry quickly!  He was fortunate enough to have many mentors in the Berkshire Hathaway family around him to emulate.  One of those mentors was Tom Pendergast!  Mark saw how Tom grew his team through hard work and dedication and how this was catapulting Tom and his team to the Top Team in York County real estate.

In 2010, Mark approached Adam Flinchbaugh and Jeff Cleaver about creating a new entity in York County.  Adam and Jeff agreed to come to the Berkshire Hathaway Homesale Realty brokerage and they formed the CCF Team.  Through the use of modern marketing techniques and traditional one on one relationship building, The CCF Team quickly jumped to the top of the York County real estate market and their Team kept a grip on the Top Spot for SEVEN years in a row! They experienced the exact same level of success that Tom Pendergast and his team had experienced in the past.

In the beginning of 2017, Mark Carr and Jeff Cleaver formed the Carr Cleaver Team at Berkshire Hathaway Homesale Realty.  They recognized the value of the Berkshire Hathaway brand.  In addition to that, Mark and Jeff appreciate the level of support and the commitment of the ownership to the future growth and development of its Realtors.

This caught the eye of Tom Pendergast.  Tom loved being part of the Berkshire Hathaway brand and knew that the Homesale family delivers a great level of support for him and his team!  Being committed to always improving, Tom saw a chance to enhance his team's level of representation and services for their clients.  He approached Mark and Jeff and presented the concept of joining forces to create a new level of Realtor Representation in York County!

As their meetings began,  it became quickly evident that Mark, Jeff, and Tom shared a MUTUAL RESPECT for one another's team and how each team had their own UNIQUE approach to deliver a high level of service to their clients!  It didn't take very long for the three REALTORS to decide that joining forces would be a GREAT DECISION and that it would be able to provide their NEWLY CREATED TEAM a next level of service and resources for all of them to offer to their future clients!

Knowledge of the industry is Power.   Results in the Industry is PARAMOUNT!   The Carr Cleaver Yanushonis Team holds the top spot in both categories!

We use cookies to enhance your browsing experience and deliver our services. By continuing to visit this site, you agree to our use of cookies. More info